Stuart Summerhayes took up race walking at age 55.  In his second race ever, he set an age group record and never looked back.  Stuart competed at most of the CMAA track and Field championships from 1991 to 2005 and won his age group every time.  Until 1999 he was the fastest male walker overall in each of the championships.  He competed in races from 1500m to 20K, indoors and outdoors, on track and road. He was a versatile walker whose age graded scores were consistently in the mid-80s for all distances. Stuart was forced to retire from race walking by illness in the winter of 2010.

Stuart competed in 6 WAVA/WMA Championships – Finland, Scarborough (non-stadia), Buffalo, Gateshead, Puerto Rico and Spain.  His highest placings were two 4ths in Puerto Rico and one in Spain.  He won gold in both walks in the World Masters Games in Edmonton in 2005.  In addition Stuart competed several times in the North America, Central America and Caribbean Regional Championships winning 6 gold, 2 silver, and 1 bronze medal.  Stuart also competed in US Masters track and field championships and consistently placed in the top 5 of his age group in North American rankings (and as high as 2nd).

Stuart did not just compete in masters races. He was never afraid to step up to the line against anyone of any age, including national team members and Olympians.  The Weinacker Cup race is an Ontario vs Michigan event featuring the best each can bring to the race.  Stuart was named to the Athletics Ontario-supported team seven times and wore the Ontario singlet proudly.  His last appearance was in 2009 when he not only scored points for the winning Ontario team, he also set an M75 record.  [One of my favourite memories in sport was a year that Ontario was lacking in youngsters to represent the province.  As the chef d'equipe, I had one national team member to build the team around.  I put the call out to the masters-age walkers.  Stuart was the first to respond, rearranging his schedule to join us in Michigan.  Three more masters subsequently signed up.  On paper we did not have a chance to win but we brought home the trophy. I keep that team photo on display – a bunch of tired but very, very happy walkers.]

Stuart competed in various Ontario open racewalk championships, competing against Olympians and national team members 40 or 50 years his junior.  Three times Stuart won the OTFA 20K championship and he placed 1st and 3rd in the 10K championships all while over the age of 65.  Stuart was the first and only old age pensioner to win a provincial athletics championships, the 10K Road Walk and to prove it was no fluke, he won the 20K Road Walk Championships a few months later.

Of the records currently recognized, Stuart set 30 and still holds 24, more than any other Canadian race walker.  He also set 4 other records in categories which are no longer kept by CMAA. One of his records still stands from 1991 and two more from 1992. 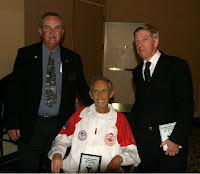 Stuart was inducted at the Athletics Ontario Awards Gala on October 30, 2010. 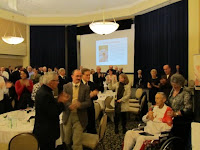