25 Canadian Records broken at the Canadian Masters Championships in Toronto 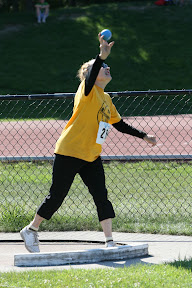 We hosted the 39th Annual Canadian Masters Championships at the Toronto Track & Field Center this weekend.
Great turnout – Great weather – Great Banquet (thanks to Lynn Bourque). Results and over 1100 photos are posted.
Check out the RESULTS page…..highlighting 25 Canadian Records and almost 30 Meet Records !!

A special thanks to all of the officials and volunteers who worked so hard to make the meet a success.
We look forward to improving a few things to make it an even better meet – as we are hosting the 2011 Canadian Masters Championships. 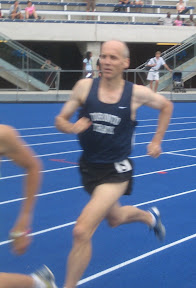 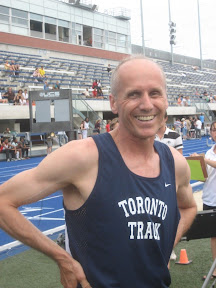 Varsity Center – the home of next year’s Championships. Mike ran an outstanding 1:55.34 – breaking his own 1:57.04 set last year. He’s getting closer to Sal Allah’s 1:54.18 World Record! Mike is one of the UTTC Masters Coaches, as well as the Canadian Masters Communications Director.
Ontario Masters Hall of Fame member Brian Oxley sends this shot of Keith Kerr, one of the first OMA Presidents. 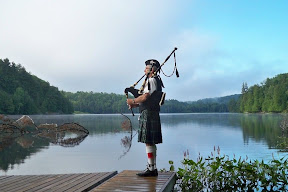 Brian does his sculling from the dock…to the inspiring pipes !

In it for the Long Run

In 1980 I turned 40 years of age and so became a “Master” athlete. To compete in age group races holds no attraction for some of my former rivals. Why I race and they do not depends on why they raced in the first place. I run because I like it and I find training and racing infinitely variable and interesting. However to get satisfaction from it I do not have to win. My critics would point to my six times second place finish at the Round the Bay Race, Hamilton as evidence of this “loser attitude”.

For me the most important part of running and racing are the memories that they cause. I have had some astonishing even bizarre experiences and one day will write some of them down. But, for now, I recall the sheer joy of running flat out the last leg of an Ontario Masters team in the Jaspar to Banff relay in 1989. There were no competitors in sight ahead or behind, no spectators, race officials or even passers by. I was on a little used road by the Vermillion Lakes as the sun came up over the Rockies. It was a glorious experience – beyond price – may you all have such moments.

As a Master I have raced in World Championships in Brugges (Belgium), Brisbane (Australia), Melbourne (Australia), Newcastle (England), Turku (Finland) and at the foot of Mount Fuiji in Japan. Each event introduced me to a part of the world that I had not known before and made me new friends. Why should I stop now?

Speaking of the World’s in Sacramento next year…. 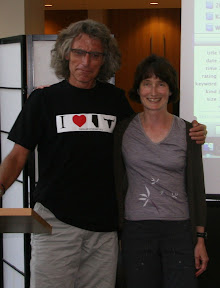 The loudmouth OMA President (L) was spouting off about how the Ontario athletes were going to kick Alberta’s %$# at last winter’s Indoor World Championships in Kamloops. A small wager was placed between said Loudmouth and the Alberta Masters Pres Donna Dixon (R). As previously reported, the Westerners cleaned our clocks!!
As loser of the bet, the Vegan was forced to wear an “I Love Alberta Beef” T shirt during Sunday’s meet!

The bet is on for Sacramento. Now come on people… we have to rally all our members or we face disgrace and humiliation at the hands of these Western Cowboys and Cowgirls yet again…and your President will be forced to….( I can’t even speak the words. It’s got something to do with HAIR! )