Ontario Masters Reaches A Membership Deal With The CMAA

The CMAA and Athletics Canada have been negotiating since 2000* to have AC Provincial Branch masters members be included as CMAA members in a reciprocal membership arrangement. The CMAA, AC, and the Provincial Branches recently agreed in principal on such a proposal. A formal agreement will be drafted and voted on at the AC AGM in May. The proposal allows any Branch, who have the ability to do so, to reach a temporary agreement with the CMAA immediately. While many Branches, who have to pass a change in their membership structure at their AGMs, will be unable to reach such an agreement until after their next AGM, some Branches – like the Ontario Masters, are able to do so in time for the 2011 membership year. 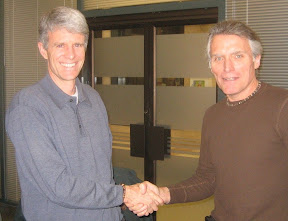 At the CMAA Executive Meeting, on Thursday Dec 16th, the CMAA and Ontario Masters Athletics agreed to implement the temporary membership agreement for 2011. Shaking on the deal were CMAA President Paul Osland (L) and OMA President Doug Smith. Starting immediately, all 2011 OMA members are also members of the Canadian Masters. This will provide OMA members with the opportunity to compete in National Indoor and Outdoor Championships and the upcoming World Masters Championships in Sacramento.
* Danny Daniels (on behalf of Athletics Canada) and the CMAA began negotiations in 2000.